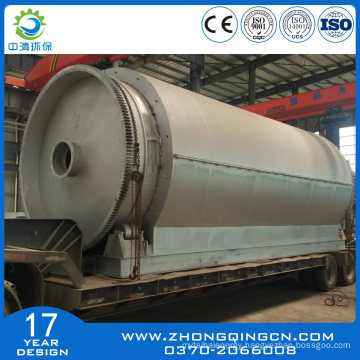 1. Introduction to domestic waste treatment
Domestic garbage contains a large amount of bacteria and more chemical poisons. Random stacking will pollute the atmosphere. Random landfill will pollute the groundwater source. Incineration will produce strong carcinogens. The harm is hundreds or even thousands of times of ordinary household garbage. Therefore, how to deal with domestic garbage has become a topic of common research and attention of all countries and governments at all levels of the world. Since the 1930s, domestic research on the conversion of waste household waste into oil and gas for power generation has begun to receive widespread attention.

In order to ensure the timely, efficient and harmless disposal of domestic garbage, after scientific and technological research, our company has designed and launched a project of resource-based and harmless treatment of domestic garbage after simple extrusion and dehydration treatment. The thorough disposal of garbage not only saves the cost of transportation and landfill, but also turns waste into treasure and creates economic benefits.

2. The background and significance of the development of domestic garbage disposal projects
Domestic garbage refers to solid waste generated in activities that are provided in daily life or for daily life, as well as solid waste that is regarded as domestic garbage by laws and administrative regulations. Urban domestic waste disposal is an important part of urban environmental sanitation. It directly serves the creation of a clean, beautiful and comfortable environment, which is beneficial to people's physical and mental health, urban economic development and spiritual civilization construction. It is also environmental protection and social sustainability. Important content of development.

In recent years, the achievements and progress in the treatment of municipal solid waste in China are obvious, especially the advanced waste treatment technology has gradually been applied. For example, in many landfills recently built, in order to improve the anti-seepage level of domestic waste landfills, high-density polyethylene film is used as anti-seepage material for horizontal anti-seepage; to improve the efficiency of landfill operations, some large-scale The landfill uses a dedicated garbage compactor, and so on.

Wtih continuous efforts, Shangqiu Zhongqing Company has developed a cracking equipment specially designed for the treatment of domestic garbage. After being processed by the equipment, it can obtain about 20% of oil profit from domestic garbage, and in the process of treatment, the domestic garbage is sterilized after high temperature to ensure environmental protection and health. Before introducing our processing equipment, we will analyze the current common treatment methods.

3.1-Landfill treatment
Landfill is an effective method for massaging urban domestic waste, and it is also the final treatment method for all waste treatment process residues. At present, direct landfill method is widely used in China. The so-called direct landfill method is to fill the prepared pits with compacted materials to make biological, physical and chemical changes, and to decompose organic matter to achieve the purpose of reduction and harmlessness. Most of the garbage in many cities in China is still open-air stacked without any protective measures. Every garbage dump has become a source of pollution. Mosquitoes are breeding, mice are plagued, and odors are raging. A large amount of waste water seeps into the ground from the surface, causing serious pollution to the urban environment and groundwater sources. Shenyang City once drilled and sampled 10 of the 35 landfills to analyze the waste fault samples and groundwater quality. The analysis found that:

a. The groundwater quality deteriorated, the pollution was serious, the water was turbid and smelly, and the anaerobic large intestine was detected in the water. Bacillus;

b. toxic and harmful substances were detected in the waste fault samples. Every day, 10,000 tons of garbage is transported to the seaside in the suburbs of Shanghai. A garbage mountain with a height of 20 to 30 meters rises and rises, causing serious pollution to the surrounding environment. The landfill treatment method is one of the most common waste treatment methods. Its biggest feature is low treatment cost and simple method, but it is easy to cause secondary pollution of groundwater resources. As the amount of urban waste increases, the number of suitable landfill sites close to the city is becoming less and less. Opening up long-distance landfill sites has greatly increased the cost of garbage discharge, which is unaffordable.

3.2-Incineration treatment
There are two common types of incineration methods, one is open burning. As shown in FIG. There is no cost to this method. In the vast rural areas or in slightly remote places, even large-scale garbage dumping sites have many methods of using such open burning. However, the pollution is particularly serious, and the cost of plastic in the garbage will also generate a large amount of dioxins when burned in the open air, which seriously affects human health. Moreover, it will cause great damage to the land at the accumulation site when incinerated.

Another application that is increasingly used is to place waste in a high-temperature furnace, a method in which the combustible components are fully oxidized, and the heat generated is used for power generation and heating. The advantage of incineration treatment is that the reduction effect is good (the residue volume after incineration is reduced by more than 90%, the weight is reduced by more than 80%), and the treatment is thorough. However, the construction and production costs of incineration plants are extremely expensive. In most cases, the value of the electrical energy generated by these equipments is much lower than the expected sales, leaving the local government with huge economic losses. Since the garbage contains certain metals, incineration is highly toxic and causes secondary environmental hazards. Incineration requires that the calorific value of the waste be greater than 3.35 MJ/kg. Otherwise, a combustion improver must be added, which will increase the operating cost to an unacceptable level in the general city.

3.3-Composting treatment
The domestic garbage is piled up in piles, stored at 70 ° C for storage and fermentation, and the organic matter is decomposed into inorganic nutrients by the ability of microorganisms to be decomposed in the garbage. After composting, the domestic garbage becomes a hygienic, tasteless humus. It not only solves the way out of garbage, but also achieves the goal of re-recycling. However, the amount of compost is large and the nutrient content is low. The long-term use is likely to cause soil compaction and groundwater quality deterioration.

Therefore, the scale of composting is not too large. Regardless of landfill, incineration or composting of municipal solid waste, pretreatment must be carried out. The most common process of pretreatment is garbage crushing.

The garbage is crushed, the volume can be reduced for landfill, the burning can be made more complete, and the compost can make the garbage more quickly. However, the composting treatment cycle is long and covers a large area. It is necessary to classify the garbage in advance and pre-separate the indecomposable components: rubber, metal, glass, and the like.

3.4- Sorting method
Separation pretreatment is one of the fastest rising methods in current application selection. Domestic waste can be sorted to obtain different substances. Plastics, metals, glass, etc. are recycled. Other non-recyclable parts are filled in or other. deal with. However, this sorting equipment has high production costs, higher operating and maintenance costs, and a large footprint. Since the mechanical parts and motors of the sorting equipment are many, and the domestic garbage is corrosive, the equipment is easily damaged or the failure rate is high during the sorting process. Therefore, the sorting project requires that all sorting equipment be used in one preparation to prevent accumulation of equipment failure. However, in the sorting process, it is inevitable that there will be bad smells and overflowing, which will bring pollution to the surrounding environment.

One sorting method uses water sorting, but the water consumption is large, and the corrosion rate of mechanical parts in the water is greatly increased. 5. Domestic Garbage Sorting System Process Description
5.1. The garbage is first discharged into the loading and unloading platform, and the loader is sent to the slab conveyor. The large pieces of interference (large quilts, large pieces of furniture, toilets, trunks and trunks) are manually sorted out, and do not enter the processing line. . A cloth machine is arranged in front of the plate conveyor, and the cloth machine has a uniform feeding function, which creates a good precondition for the subsequent sorting station. The garbage is then conveyed to the manual sorting platform by the belt conveyor, where the sorting workers select large items (quilts, cotton clothes, large trunks, branches, long sticks, wine bottles, etc.) and hazardous wastes in the garbage. Out.

5.2. After the manual sorting of the garbage, the garbage directly enters the bag breaking machine, and the broken bag can tear the bagged garbage in the garbage to facilitate subsequent processing.

5.3. After the belt is transported by the belt conveyor into the drum screener for screening treatment, according to the requirements of this process, we set the screen size of the screen of the drum screen to 50mm. The drum screen can divide the garbage into sieves larger than 50mm. The upper material and the undersize of less than 50mm, the material less than 50mm is mainly organic matter, and the organic matter is selected by the hanging magnetic separator to select iron (caps, batteries, coins, etc.). Go directly to the composting plant for disposal.

5.4. The sieve on the sieve larger than 50mm can be selected by magnetic separation (mainly iron beverage cans and iron packaging cans), and the magnetically selected sieves are fed by the belt conveyor. The air separation machine is used for air-selection treatment. The comprehensive air-selection machine can select the heavy materials (bricks, tiles, glass shoes, etc.) in the sieve, and the rest are combustible mixtures (mainly containing hard plastics, Textiles, rubber shoes, rubber products, wet paper products, light plastics, etc.).

5.5. The heavy materials are manually sorted and selected for use, and then directly transported or land-filled (pulverized bricks). The combustible mixture is sent to the coarse crusher and the fine crusher by a belt conveyor and broken into a particle size of 50 mm or less, and then the belt conveyor is sent to the refining system.

7. Profit Analysis:
Contact us if you need more details on Domestic Garbage Recycling Machine. We are ready to answer your questions on packaging, logistics, certification or any other aspects about Recycling Machinery、Sorting System. If these products fail to match your need, please contact us and we would like to provide relevant information.